Week one was ok, I had the idea of trying to combine different formats but making it all a bit feral at the same time. The first week of guests had arrived, we were all still wearing T shirts that resembled the colour white (is white a colour? Do I want to turn this into some sort of profane QI? QS, Quite Sh*te perhaps? No, back to the script Dave) and our smiles were genuine as the season was just underway and the first batch of punters were having a great time lapping up the feral magic.

Week two was chaos. I had tried to bring about a Weakest Link format, complete with glasses and appalling ginger wig (plus empty bottle of rum, sorry Ann, didn’t mean to mock the afflicted) and alas her spirit possessed me and I was beyond rude to guests and staff alike (at this point, as an aside, I would like to dispel the myth that surf instructors can be vacuous, talk like they’re in a Bill and Ted movie, and are unable to retain anything except the difference between “gnarly” and “shore dumping”. I will also conveniently forget that one voted for himself…). It was not my greatest TV moment.

So the format reverted to the original. If it’s not (yet) broke, don’t fix it. For those who have been to Feral, you will know the format by now. Teams of four, group rounds and individual rounds. If you’ve not YET been to Feral, firstly shame on you but hopefully you are on your way in 2016, and secondly I will not divulge too much about the format because last year’s one seemed to work, there’s a chance the instructors will have remembered it (depending on the number of waves that have crashed into their ears) and because I like to surprise. 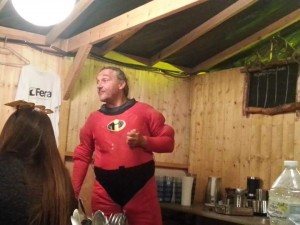 Anyway, it became a weekly slot… and that was where the descent into madness began. I had no idea how much preparation goes into making a quiz. In my spare moments I would be trawling the internet for previously used pub quiz questions, trying to guess the intellectual level of the guests that week, taking into account their ages, their interests, their nationalities, always including at least one Swedish question to counter Anna’s claim of anglophilic bias (and to make her drink a shot when she got it wrong, sorry that should say IF because I am sure there must have been one week she got it right).

That by itself would have been fine, but I was finding that during the week, with assorted random chats with various people, subjects would be mentioned and my eyes would temporarily glaze as I went into “that would make a good quiz question” mode, apologies to anyone that thought I was giving them my full attention.

However, for some the quiz became the highlight of the week, the mixture of anarchic revelry and competitive rivalry seemed to balance most times (really? balance? are you sure, Dave?), and if not there was always the shot of Old Nick for those who dare to challenge the supreme authority of the Quizmaster. I would love to write about some of the events of 2015 but for legal reasons (and because 2016 might end up even better) I think I had better save it.

OK, so I spent a few weeks obsessing over quiz questions. Whoopee Doo!

If only that was the end of it. The season ended, we packed everything up, we had the Last Supper and headed home to this septic isle to our various muggle jobs. But, like amoebic dysentery on a gap year student coming back from India in tie-dye and beads, four stone lighter but with a cosmic smugness, the quiz infection remained. I went back to my “things I do in between my adventures” job but found that conversations still had that “Dave’s not with us” aspect to them, as the virus demanded I make mental notes for forthcoming quiz questions.

I even attempted to purge myself of a brain full of useless trivia by setting Halloween and Christmas quizzes but to no avail. Even as I type I have just put together another music round for a quiz that may happen in a few months time. I don’t know if this condition is treatable, and to be honest I don’t even know if I want to have it treated, but if you find yourself at Le Pin Sec during the 2016 season (and I can think of no possible reason why you would not want to) then spare a thought for the poor egotist commanding centre stage for the Tuesday night quiz. Feel free to challenge his answers (please) and remember that, behind the facade of the confident outgoing game show host, there lies a broken man, sitting on the floor of a darkened room, rocking backwards and forwards and mumbling to himself “that’d be a good question for a quiz”

And on that subject, here’s something I rustled up this morning … ten bits of songs, how many can you get in real time?