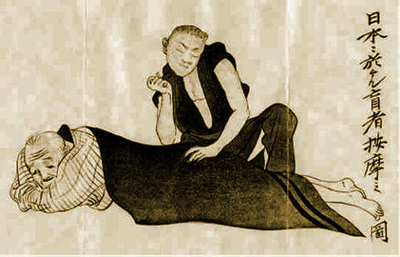 Or… how to combine Japan, India and France into one experience?

WARNING: this post is more sensible than the last one. Apologies in advance.

For a few of you, shiatsu needs no introduction. But for the rest, please bear with me. Let me cast you back in time to the summer of 2015. Having been employed as a driver, and found myself charged with creating weekly anarchy at the quiz (see previous blog, and see if you can beat Steve’s score of 9 on the musical round at the bottom of the page) I also let slip that I was qualified in shiatsu. As is often the case, this met with blank stares and the occasional “that’s nice Dave” (with accompanying “does Nurse know he has left the ward?” worried look)

What is it? Can I get away with saying “acupuncture meets massage”? This is hopelessly inadequate, but it gives people a rough idea and dispels any idea of dogs, raw fish, paper-folding or any other lazy Japanese stereotypes. It treats the body and mind via meridians and pressure points.. I will stop there before you switch off.

What’s it for? Obviously muscles and joints and surfing-related injuries. It also can work well on hangovers (although a fast-track Liver stimulation can be a tad intense for some directors) and even on releasing deeper emotional tensions (should you feel that your holiday is the best time to let such stuff go). But for most people it is pleasantly relaxing, they can’t believe they’ve been lying there for more than about five minutes, and they appreciate a glass of water to return to their bodies. Chances are they don’t immediately jump up and decide to go for a run.

Anyway … there I am, having the job of my life: getting to meet lovely people, getting to work with lovely people and being in lovely sunshine and lovely waves (that’s enough of the “lovelies” for now)… and I mention shiatsu. I find a volunteer willing to be pressed, and it all starts from there. I’m doing what I love, and others are benefiting.

Hmmm… others benefiting. I wonder ….

I could not justify making money for myself from shiatsu. After all, I was in the best job, in a great climate, surrounded by brilliant people, and getting paid to spend all day grinning because I cannot believe my luck. They even had a bottle of Old Nick behind the bar, my life was complete. Maybe I can use my shiatsu to help even more folk to benefit?

Way back in time, having just decided that a degree in Business had merely been an excuse to destroy vital organs in freelance alcohol research, I ended up in India. Impressed with the country, I decided I would help set up an orphanage to combat the abandonment and infanticide I was discovering. This home is still running, still helping children, and always needing funds. So… why not allow people to help the children out?

That way, everyone wins. If I work on a donation basis (with suggested prices for those that don’t like to “pay what they feel”), then we all gain from it. Surf instructors were the exception and, whether they liked it or not (they usually did), they got their shoulders pummelled as they sipped their first beer of the evening. No point in confusing them with having to count out money… just buy Dave a beer when he’s done. J

By the end of the season the orphanage was up £300,  people had come away feeling all floaty and chilled, and I felt most righteous in myself.

If I may be permitted a bit of self-publicity here, I will be back in 2016 doing the same thing, fitting it around my other stuff. Appointments will be held between the hours of “drekly” and “inshallah” (that’s feral time, not clock time) and will last for approximately as long as they do, depending on when they start and finish.

Feel free to book me up.